Updates to Peter's profile since your last visit are highlighted in yellow. 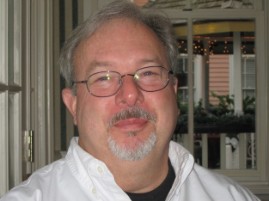 After graduating from Lanier, I attended Auburn University where I majored in Mechanical Engineering. In 1973, while at Auburn, I married Karen Franklin, also a Lanier grad. I graduated in late 1974, then entered Air Force active duty in July 1975. My first Air Force assignment was in the base civil engineer squadron at Minot AFB, ND.

I left Minot in early 1978 for RAF Chicksands, UK, where I worked as the Chief of Programs. In June 1981, Karen, our two children, and I relocated to Eglin AFB, FL where I conducted operational test and evaluation of Civil Engineer-related equipment and procedures. Soon after my promotion to Major in November 1986, I traveled to the Great White North of Thule AB, Greenland, as the Base Civil Engineer.

In 1988, I was re-assigned to Arnold AFB, Tennessee, as the Director of Facility Maintenance for the Arnold Engineering Development Center. Four years later after promotion to Lt Col, I went to Yokota AB, Japan, as the commander of the 374 Civil Engineer Squadron. After two years there, I was reassigned to the Air Force Inspection Agency at Kirtland AFB, NM, as the Air Force's Senior CE Inspector. That turned out to be my last assignment prior to my Air Force retirement.

In December 1998, I retired from the Air Force to accept a position with Florida Community College in Jacksonville, FL as their Associate Vice President for Facility Management & Construction. I resigned that position after 3+ years to accept a job offer from TRW (now Northrop Grumman).

In 2002, my employment with TRW returned me to Eglin AFB. After selling our home in Jacksonville, Karen and I re-established roots in Niceville, FL in October 2003.

After six years with Northrop Grumman in positions at Eglin, Tyndall AFB, and Hurlburt Field, I accepted an offer from Innovative Technical Solutions, Inc., a California-based Design-Build construction firm, for a program manager position.

After 37+ years together, Karen and I are still wondering what we'll do when we grow up. Our children are doing well. Michael, his wife Dawn, and our granddaughter Stella live in Orlando, FL where Michael owns Blaise Built, Inc., a general contracting firm. Lindsay and her husband, Chris Auger, are both Air Force officers stationed at Nellis AFB, NV.

When I reflect on my time at Lanier, so many of my memories involve music--the Lanier band, The Soul Division during my sophomore year, Southern Comfort during my junior year, playing in Bye Bye Birdie as a sophomore, and conducting the pit band for Lil' Abner my senior year. Good times!

Music continues to play a major role in my life even today! I've been involved with contemporary church music for the past 30+ years (guitar & voice) and still play trumpet in a local swing band. Actually, let's make that trumpets as you just can't have too many!

In my senior year, I convinced a gullible sophomore (Laurie Pater, if I remember correctly) that I was twins, Peter & Tom Blaise. After several weeks, she would see me in the hallway, smile, say "Hi," then ask, "Which one are you?"

I'm not sure I ever confessed the truth to her.