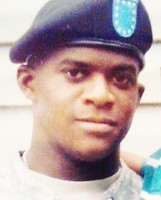 Byron is an alumni of Sidney Lanier High School and a 2004 graduate of Exploratorium Academy.

Funeral services will be held April 11, 2015 at 10:00 AM from Ross-Clayton Funeral Home Chapel. Interment will follow in Forest Hills Memorial Park.