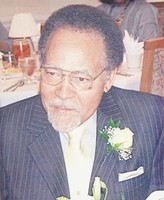 Gilbert Jones, lifelong Montgomery resident, transitioned to glory Monday, November 2, 2015 at the age of 83. Funeral services will be held at First Baptist Church, 347 North Ripley Street, on Monday, November 9, 2015 at 12:00 noon with Rev. E. Baxter Morris officiating and Rev. Dr. Farrell Duncombe providing the eulogy. Interment will follow at Alabama Heritage Cemetery. He was born on November 28, 1931. He confessed Je-sus Christ as his Lord and Savior at a tender age at historic First Baptist Church, under the pastorate of Dr. J. D. Harris. One of his fondest childhood memories was walking to church on Sunday morning and assisting his grandmother with placing flowers on the altar for the worship service. He also sang in the youth choir directed by his childhood sweetheart, Dorothy Posey, who he later married. He was the ultimate role model and provider for his wife and the five children born to their preordained union. He was preceded in death by his mother, Daisy Jones Gilmer, grandmother, Ella Jones, uncle, L.D. Jones and aunt, Ora Jones.

Gilbert Jones completed his elementary education at St. John the Baptist Catholic School and his secondary education at St. Jude Educational Institute, Montgomery, Alabama. He matriculated at Xavier University, New Orleans, LA but was drafted to serve his country in the United States Army during the Korean Conflict. Upon his honorable discharge as Technical Sergeant in 1952, he continued his college education at Alabama State College, now Alabama State University. He received a Bachelor of Science in Secondary Education in 1957.

In his season of retirement, Gilbert Jones continued his untiring commitment to his family, friends and neighbors. He had a high priority for spending countless hours enjoying the company of his grandchildren and sharing his wisdom. He served as a volunteer with the First Baptist Church food program delivering meals to the sick and shut-in, transporting neighbors to medical appointments, and was an active member of his neighborhood association.