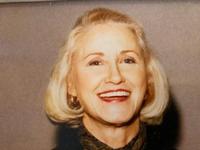 LaVerne Davis Ramsey 83, was a light in our lives. She held a unique place in everyone's heart, whether a friend or a family member. Loaded with talent, LaVerne was highly intellectual in business and in her pursuit of knowledge. Athletic all of her life, she played competitive tennis in her younger years.

By turns she showed her artistic flair, taking up first sculpture and painting, then pursuing her life-long passion for photography, which she readily shared with everyone. All was not serious with LaVerne for she had a zany sense of fun, best showcased by standing on her head at her 60th birthday party --- just because she could.

Born in Buffalo, Alabama on October 31, 1936, to B.F. and Flora Clark Davis, LaVerne had three brothers, Warren, Eldon, and Ronald. After graduating from Sidney Lanier High School in Montgomery, AL, she attended Huntington College graduating with a degree in English.

LaVerne married William T. Ramsey in 1958. They spent most of their life together in Birmingham, Alabama.

Ever ready to learn and grow in the business world, LaVerne worked first for the Polaroid Corporation, then Merrill Lynch, and, finally Prudential Securities. She started as a stockbroker and became a Certified Financial Planner. She was dedicated to attending Warren Buffet's annual stockholder's meetings, becoming his official photographer while there. This same mindset applied to another of LaVerne's passions: she was born to travel, and not just the usual forays.

LaVerne journeyed to the headwaters of the Peruvian Amazon, slept in a yurt in Mongolia, braved high seas going to Antarctica, and traveled to Tanzania and Kenya on safari. LaVerne's love of other cultures also took her to live in homes in multiple foreign countries with the Friendship Force.

When she was home, LaVerne took active roles in organizations that fed her many interests including Toast Masters Club, the Shades Valley Camera Club, Zonta International-Birmingham Chapter, and Friendship Force.

LaVerne's dedication to helping others in need also included traveling to Kenya to visit the children educated by the Makena Children's Foundation.

LaVerne died on May 25, 2020, in Dothan, Alabama. She is survived by her brother, Ronald P. Davis, and numerous nieces, nephews, and friends.

Her Memorial Service will be held outside at Southern Heritage Funeral Home, Indian Springs, Alabama on Saturday, June 6, 2020, at 1 p.m.

Due to COVID 19, in lieu of visitation, the family requests people leave notes and comments on the funeral home's page for LaVerne. The family requires those attending the service to wear a face mask.

Survived By: Ron Davis, brother, class of 1960, Linda Fitzpatrick Davis, sister-in-law, class of 1961, and a host of nieces, nephews, and friends worldwide.

LaVerne graduated from Huntingdon in 1958, worked for Polaroid Corporation, Merrill Lynch, and retired from Prudential Securities. She was a Certified Financial Planner. She annually attended Warren Buffett's meetings in Omaha and became his official photographer.

She and husband Bill Ramsey, another Poet, were married from 1958 until his death in 2012. He was her biggest supporter in all her endeavors.

LaVerne loved to travel and visited multiple foreign countries with the Birmingham Chapter of Friendship Force. She also hosted many of the friends she made in these countries in her home.

LaVerne was a member of The Toastmaster's Club, the Shades Valley Camera Club, Zonta International, and the United Daughters of the Confederacy, Pelham Chapter.