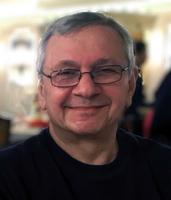 Arnold (Arnie) Samuel Fast, 73, passed away peacefully at his residence on April 30 after a lengthy and courageous battle with cancer. He graduated from Sidney Lanier High School in 1967. After the passing of his father, he and his brother co-owned Fast Auto Parts until 2000. He then went to work for Jimmy Durbin and Danny Durbin at Durbin Auto Parts.

He was preceded in death by his parents, Morris and Marion Fast. He is survived by his loving wife of 43 years, Paula Gray Fast, his daughter Heather Fast Stojak (David), and granddaughter Sadie Stojak. He is also survived by his sisters Marsha Orange (Steven), Susan Goodman (Alan), brother Harvey Fast, and extended family members and friends.

His family would like to offer their appreciation to the wonderful staff and volunteers at Montgomery Cancer Center and Central Alabama Radiation Oncology. Words will never express our gratitude to Dr. Scott McDaniel, Dr. Alex Whitley, and Dr. Dennis Woodling. We would also like to give thanks to special caregivers Donna Vickery, Kisten Gibson, Samantha Lofland, and staff with Amedisys Hospice Care.

In lieu of flowers, contributions in Arnie's memory may be made to: