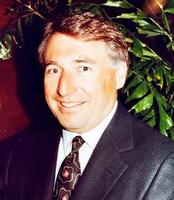 Buddy grew up in Montgomery as an only child, loved and raised by not only his parents but also his stepmother Myra Metcalf and his aunt Elizabeth Metcalf. He attended Lanier High School where he played baseball and bought and flipped cars on the side. It wasn't until college, however, that Buddy found his three true and lasting loves: Auburn University, Sigma Chi, and Jean Hughes.

Not a great student, especially with his original engineering major, Buddy eventually found accounting where he excelled. More interesting than studying was Sigma Chi. With the Gamma Sigma chapter at Auburn, he found brothers for life and Buddy spent his life devoted to Sigma Chi. In 1999 he became Grand Consul of the national fraternity and was so proud to serve in nearly every capacity possible. In his retirement, he continued to work with the young Sigma Chis at Auburn and enjoyed every moment of continued work and mentorship with the next generation.

At 19, Buddy asked Jean Hughes out three times before she said yes. Once she finally relented to date she realized what a fun and great guy he was. They quickly became inseparable and were married in November 1969. After marrying in Birmingham, they moved to Atlanta where Buddy started a job with Alexander Grant and quickly realized his big personality wasn't made for working for other folks at a Big 5 accounting firm. So, he started his own accounting firm, Metcalf Davis, in a small space with Jean helping him on the weekends. He grew the firm into a highly successful business that he loved.

Jean and Buddy loved their life together, traveled the world, and raised two daughters, Melissa Metcalf and Amy Clark. He loved and adored his girls. He was invested in their day-to-day activities, prioritized education, and of course, became a sports fan of his girls' alma maters. His life was grounded and centered around his three girls and ultimately his two granddaughters, Bonnie and Norah.

Buddy always had fun no matter where he was or what he was doing, telling his very long and often very funny stories to anyone who would listen. It was that spirit, humor, and joy for life that got him through his diagnosis of kidney failure. Ten years ago, he received the ultimate gift of a kidney from his beloved niece, Leigh Tucker, and was so well taken care of for more than a decade by Dr. Ashtar Chami at Emory and Dr. Laura Watkins at Piedmont. He reminded his loved ones and doctors in any way he could how grateful he was for Leigh's precious gift of life, allowing all of us to enjoy his craziness for ten more years. Part of his appreciation for this gift was being able to serve on the board of the American Kidney Fund for years.

Buddy and Jean spent 50 years in Atlanta, loved the city, and loved raising their children there but longed to return to the place they met. In 2018, they bought a home in Auburn and moved back to where it all started in 1967.

Those who knew Buddy loved Buddy, and you knew you were loved dearly in return. He loved his extended family of truly beloved sisters and brothers-in-law, nieces and nephews, and of course all of his friends near and far. He is survived by his loving wife, daughters, granddaughters, and two grand pugs. Buddy is irreplaceable and will be forever missed by all who loved him.

Visitation with the family will be on Sunday, February 27, 2022, from 2 to 4 pm at H.M. Patterson & Son Arlington Chapel in Sandy Springs. The funeral service will be at 10 am on Monday, February 28, 2022, at the Cathedral of St. Philip with a reception to follow immediately. The family will hold a private burial in the afternoon at Arlington Memorial Park.

In lieu of flowers, please consider donating to the American Kidney Fund.

Published by The Opelika-Auburn News on February 24, 2022.