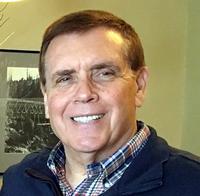 Taken from us far too soon, Benjamin Erwin Pool, a longtime resident of Pike Road, passed away after a brief illness on August 3rd, 2020. Ben’s wonderfully big personality touched so many. He would light up a room and engage everyone with his hilarious and gregarious character. If he did not make you laugh, then you were missing a funny bone.

By his side since the age of 17 is his surviving wife of 51 years, Katherine Robbins Pool. Ben adored Katherine and they lived life to the fullest traveling all over the world, preferring to stay in B&Bs, so that Ben could befriend the hosts and meet new people. He loved people and making them laugh. His favorite spot was sitting out on his pool deck surrounded by oak trees and his wife and cats relaxing with a happy hour drink enjoying the tranquility.

Born the youngest of 3 children to Benjamin Mitchell Pool and Marie Elizabeth Blye, he was the mischievous little brother to his devoted sisters Gypsey Ann Capell (John), and Elizabeth Lynn Pool, all who predeceased him.

He attended Sidney Lanier High School (Class of 1964), then Auburn University where he was a member of the Sigma Alpha Epsilon fraternity (frequently raising hell) and then unearthed his love of the law earning his Juris Doctor from the University of Alabama in 1972.

After being drafted in the US Army, Ben excelled as a lawyer and devoted his entire life to his practice in Montgomery. Anyone who has known him professionally admires his ethical approach as well as his ability to bring humor into every situation. He also found the time to be the Municipal Judge in Millbrook for 43 years, served as an adjunct professor of law at both Thomas Goode Jones Law School (now Faulkner Law) and Huntingdon College where he taught and mentored many who are now members of the Alabama State Bar.

Home is where his heart was filled with the joy and laughter of his two surviving children, Gregory Mitchell Pool (Mary) and Rebecca Marie Pool (Matt Hutchison) and his granddaughter Harper Ashley Pool who is going to deeply miss her “BoBo.”

Ben was often the funniest person in the room with his quick wit and loved to make people laugh even in the most awkward moments. He was likely to break into singing Hank Williams Sr. or Elvis songs without warning in any situation. He almost had his time to shine at the Grand Ole Opry once in college.

There’s certainly more than one tear in our beers as we say goodbye to this extraordinary man. He will live in our hearts always, especially when we drink a fine Oregon Pinot Noir, sit on a riding lawn mower, or swim laps in the pool.

Join us by attending a graveside service on Monday, August 10th at 10am at Greenwood Cemetery.

In lieu of flowers, Ben would have appreciated a donation to the Montgomery Humane Shelter in his memory to honor the numerous cats he so loved in life, including Ginger, Lil’ Kitty, Walt Walt, Cocoa and Maddie.

A larger celebration of life will be held at a later, safer date. Please leave your email with the family if you would like to be notified.