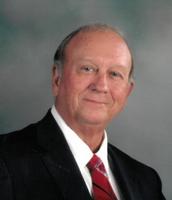 Herman Wayne Herring, age 83 of Moss Point, passed away September 10, 2022. Wayne was born August 19, 1939, in McCalla, Alabama. He graduated from Sidney Lanier Senior High School and received a Bachelor of Arts from Auburn University in 1962. In

1963 he married and moved to Jackson, Mississippi to work for Gulf Oil Corporation and started his family. He made a leap of faith in 1970 and moved to the Gulf Coast to open the first McDonald's Restaurant in Pascagoula. Wayne would retire in 2011 after being a McDonald's Operator of 7 locations for 42 years. He was an avid golfer and enjoyed spending time watching Auburn football.

He will be missed by his great-grandchildren Austyn Dion Manasco and Thiago James Herring.

There are also several other surviving relatives and friends.

Visitation for Mr. Herman Wayne Herring will be at O'Bryant - O'Keefe in Pascagoula on Thursday, September 15th from 6 pm to 8 pm. A graveside service will be held to lay Wayne to rest at 11 AM on Saturday, September 17th at the Coosa River Cemetery in Deatsville, AL.

Condolences may be expressed online at www.obryantokeefe.com.

Published by Mississippi Press from September 13 to September 14, 2022.