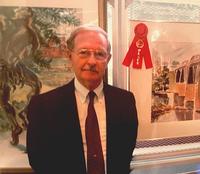 Joseph Alvin Stone, Jr., 90, of Deatsville, Alabama passed away peacefully surrounded by family on Sunday, October 23, 2022. He was born in Montgomery, Alabama on August 26, 1932. Joe was a dedicated husband and loving father with a kind and gentle spirit. He graduated from Lanier High school in 1951 and received his B.A. from Auburn University in 1955 with a degree in industrial design. Joseph was a member of the Delta Tau Delta fraternity. He proudly served in the U.S. Army as First Lieutenant from 1956-1958 and was stationed in Gonsenheim, Germany. He was a tank platoon leader with Company D, 67th Tank Battalion of the Second Armored Division.

Joseph worked as an illustrator in his young career and was part of the exciting space program and supported the artwork and illustrations for rocket engineers with the Army Missile command. Living in Cape Canaveral, Joe and his wife, Junera, experienced many space launches including Alans Shephard’s first launch in space in 1961.

He started Stone Piano Company in 1972 with his father and brother -David Stone. Joe was a well-known Montgomery artist and member of the SACS Gallery with artwork commissioned by many around the State of Alabama and beyond. He was also a member of Memorial Presbyterian Church and an ordained Deacon.

A visitation will be held at Leak Memory Chapel in Montgomery, Alabama on October 26th beginning at 1:00 PM followed by a graveside service at 2:00 PM in Greenwood Cemetery with Pastor Shane Russell officiating.